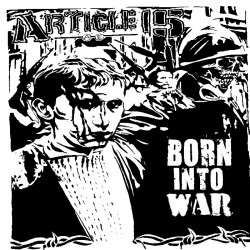 Article 15 is born from the thirsty earth of northern New Mexico. Through a melding of folk and anarcho-punk, their music is a battle cry against hate-mongering fascists and a tool to help build a new world based on peace, justice, and an egalitarian autonomy of the planet and its inhabitants

“Born Into War” was recorded remotely using the DSO rig in the living room of the lead singer’s house. This is a classic old Taos Adobe, but has a great wide open living room with 14 foot ceilings, wood floors, and adobe walls. I have always wanted to record in this space. They host some great house performances with touring bands and its always got a good sound and a great feel. We set the Lou, the drummer, up at the far end of the living room and we isolated the amps in other rooms, there is still a fair amount of bleed. Jeff and Boone were able to stand in the living room so that everyone could see each other. We did all of the basic tracks live. Though the guitars were doubled or tripled we used the live track on every final track. I was able to setup a pretty comfortable engineering station in a bedroom.

Listen to the Full Album or Buy!