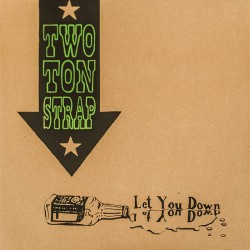 While maintaining a steady flow of homemade recordings, the band stepped into the Barn studio in Questa, NM, with producer Dave Costanza (Art of Flying, Lords of Howling, The Whitefronts) to record their first studio outing, the the full-length “Let You Down.” Self-released, “Let You Down” is a throwback masterclass in independent analog: recorded and produced on two inch magnetic tape through a vintage 32-track mixing console. The albums themselves are pressed from the scrap trimmings of colored vinyl, making each individual record a unique blend of salvage. The covers are each hand-printed, featuring two designs by local Taos artist-hero Sarah Hart, of the Hart Print Shop. In line with the band’s DIY ethics, they self-financed the record and oversaw as much of its recording and production as possible. Please help them recoup losses by buying the album!

Preview of the album:

Listen To the Whole Album!
Buy Vinyl or Download!

Weaned on Nashville country radio and DIY punk rock in rural nothern New Mexico, Two Ton Strap is a home-grown country-punk band from Taos, NM. Two Ton Strap has been performing in the Taos area for over 7 years and has also made short tour runs to the midwest and west coast in a 1982 Ford Country Squire. The band plays mostly original music, but also offer their own take on songs by Freddy Fender, The Replacements, Wanda Jackson and tattered Taos country legends Handsome Molly. Primary songwriters Kan Namba (banjo) and Kevyn “Koko” Gilbert (guitar) focus lyrically on the daily struggles and minor victories of living in a small town, fighting the world and yourself to stay on a straight path. But never too serious, the rhythm team of Max Moulton (drums) and Conrad Coops (upright bass) grounds the band with a swinging step and good-times drive.