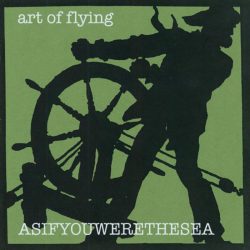 From its remote base of operations near Questa, New Mexico, thirty miles north of Taos, Art of Flying specializes in a hazy and beautiful sound that thrives off the grid like a wild desert flower. Comprised of San Francisco transplants David Costanza & Anne Speroni, and longtime Portland musician Larry Yes, (along with Peter Halter from Denver on Drums); the gentle, air-going trio flies a little sideways through a spacy sprawl of fractured noise folk and understated psychedelia. With roots in the Whitefronts, Lords of Howling and Granfaloon Bus, Art of Flying sings upbeat ballads and unresolved love songs populated by lost sailors, butterflies and mystical magpies. Co-produced by d.biddle members Jeff Davenport and Jamie Smith, & Art of Flying.

This cd is beautiful. Songs that are as achingly heartbreaking as life itself, sung by an old man with the heart of a child. Folk-savant arrangements add to the both-ends-of-the-lifespan feel; ambitious arrangements played with a minimum of skill and a maximum of emotion. These songs feel like they might fly apart at any moment, but are held together only by their sheer gravity. Think Will Oldham, Mark Linkous, Jeff Mangum – Dave Costanza deserves a seat at that table.