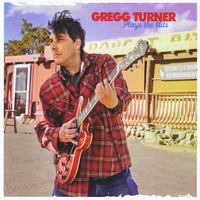 Recorded & Mixed at the Barn Recorder by David Costanza. Mastered by John Golden at Golden Mastering.

Gregg Turner was original and co-founding member of LA punk-rock legends The Angry Samoans (where he was veteran co-singer/songwriter and guitarist for over 15 years). This, his first solo CD, exudes a similar type of knucklehead humor and catchy original pop/rock tunes, more in the vein of say Tom Lehrer, Allan Sherman and Jonathan Richman ! Currently a mathematics professor at a liberal arts university in New Mexico, Turner spends free moments singing about such things as “The Pharmacist From Walgreens,” “Satan’s Bride,” and “I Dreamed I Met Lou Reed,” while offering inspired cover versions of Roky Erickson’s “Starry Eyes,” Lou Reed’s 1964 hot rod opus “Cycle Annie” as well as a new apocalyptic spin on P.F.Sloan’s “Eve Of Destruction.” Backing Turner up on most of these tunes is the legendary Billy Bill Miller on electric autoharp who gained notoriety as a member of the Aliens, Roky Erickson’s backing band in the 70’s and 80’s.